skip to main | skip to sidebar

I recounted in the previous post how I discovered that we have been using the wrong name for our great-grandfather on our mother's mother's side. Also, in the post before that I mentioned the probability that our Wohlgemuth family must have come from West Prussia instead of the East Prussian areas I had favored earlier.

So with Isaak's correct name, as well as exact birth and death dates from the headstone, I hopefully dove into the various Jewish genealogy resources that could be helpful, particularly the JRI-Poland and the German SIG and databases, as well as into Ancestry.com, which sometimes has sources that JewishGen.org does not.

So first the bad news. There is no magic hit that says this is our Isaac. Lots of Wohlgemuths all over Poland and Germany, plenty of Isaac Wohlgemuths, but none that matches up the right dates and likely places. I would have thought we'd at least turn up the burial information we already have, since the Weissensee Cemetery is well documented. I wonder why it's records are not in JewishGen's JOWBR online burial registry.

So while we can't yet locate our Isaak, a cluster of Wohlgemuth hits shows up in a resource called the West Prussian 1812 Citizenship Database. Here's a list of the 10 citations, with their surname, given name (original and new) and town (Prussian name and Polish name).

To get an quick idea of the geography, I used the Polish town name to locate them on a map in relation to Elbing and Danzig, the cities where we can locate our family members 80 years later. Here's the map with labels for the Prussian city names.  There is one outlier for the town of Landeck that doesn't fall in this region, but every other Wohlgemuth on the list is more or less within spitting distance of Elbing and Danzig. 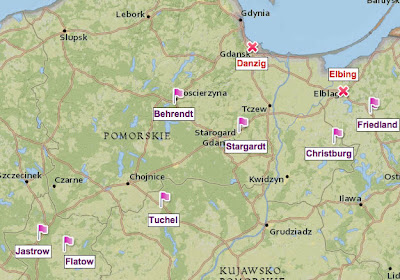 Okay, so what is this list? Here is the description of it on JewishGen.org:

'This database is an extract of 2,382 records from the General-Verzeichniss saemtlicher in dem Departement der koenigl. Regierung von Westpreussen vorhandenen Juden welchen das Staatsbuerger-Recht ertheilt worden. ["General Register of all Jews residing in the Royal Governmental Province of West Prussia to whom Citizenship was granted"], Marienwerder, gedruckt in der Koenigl. Westpreuss. Hofbuchdrukkerey. [Marienwerder, printed in the Royal Westprussian Court Press], (1812).

In the foreword to the register there are "instructions to be observed in regard to the process of Citizens as opposed to the foreign Jews". Among others: "A further instruction is to be observed by the police authorities in relation to the Jews arriving from foreign lands as set out in the edict of 11 March 1812 regarding the citizen’s rights in relation to the Jews in the Prussian states".

The edict covered all Jews in West Prussia who were able to earn their keep. It differentiated - and excluded - those Jews who entered the province illegally, and lived off official and unofficial charity. In future they were to be deported summarily.

Next the description defines the various columns of data that are presented, beginning with "Surname: - Newly opted family name taken by the new Jewish citizen"

Thus, we are seeing the outlines of the story finally taking shape, and how it is directly relevant to the questions we are raising today about German citizenship. For our ancestors in Pomerania, one requirement for obtaining Prussian citizenship was that they had to conform to the new convention of adopting formal surnames. Before then, these Jews on the list were called by their Hebrew name with a patronymic reference to their father. Solomon ben Moses. Jacob ben Abraham.

But now in 1812, thousands of Jewish workers and merchants and their families had to drop the patronymic and adopt a new surname. For whatever reason, it is evident that the name Wohlgemuth is assigned or chosen in a statistically significant number of cases, especially in this vicinity of Pomerania to the south and west of the port city Danzig.

Why Wohlgemuth? It means "cheerful" or "good-natured," possibly with a hint of "benevolent" or "charitable." We know that it was also a name that was also in use by non-Jews, and that today there are many lines of Jewish and gentile Wohlgemuth families.

I'm going to hazard a guess that it was more or less on a list of acceptable names that people could choose for a surname. Perhaps if you didn't pick a name based on your occupation or your town, you might choose to style yourself as a good-natured Jew, a Wohlgemuth.

And now I'll hazard a bigger guess, that one of the Wohlgemuths on the 1812 list, particularly one of those from the towns closest to Elbing, is a grandfather or great-grandfather of our Isaak Wohlgemuth, born in 1865 in one of those same towns but who later lived and prospered in Koenigsberg and Berlin.

Isaak is the source of our citizenship claim, at least on the Wohlgemuth side (we also have the Ringels). And now we have a pretty good idea, or at least a good theory, about how his forebearer and thus our family originally acquired those citizenship rights.

One final caveat and then I will end this overlong post. I don't know how Prussian and Polish citizenship was recognized under German law, either in the past or as it applies today. Here are Wikipedia excerpts that describe the complicated geopolitical history of the region.


Most of Royal Prussia was annexed by the Kingdom of Prussia in the 1772 First Partition of Poland, and became the Province of West Prussia the following year, with the exception of Warmia, which became part of the Province of East Prussia. The Polish administrative and legal code was replaced by the Prussian system

Further Polish areas were annexed in the Second Partition of Poland in 1793, including cities of Danzig (Gdańsk) and Toruń (Thorn).

From 1807–13 during the Napoleonic Wars, southern parts of West Prussia were incorporated in the Duchy of Warsaw.

In 1815 the province, again annexed by the Kingdom of Prussia. From 1824-1878 West Prussia was combined with East Prussia to form the Province of Prussia, after which they were reestablished as separate provinces.

The region became part of the German Empire in 1871 during the unification of Germany. It underwent German measures aimed at Germanisation of conquered Polish territories.

After the Treaty of Versailles in 1919, most of West Prussia was granted to the Second Polish Republic (the Polish Corridor) or the Free City of Danzig, while small parts in the west and east of the former province remained in Weimar Germany.

The region was included in the Reichsgau Danzig-West Prussia within Nazi Germany during World War II and settled with 130,000 German colonists,[10] while between 120,000 to 170,000 Poles and Jews were ethnically cleansed by the Germans.

All of the areas occupied by Nazis were restored to Poland according to the post-war Potsdam Agreement in 1945, along with further neighbouring areas of former Nazi Germany. The vast majority of the remaining German population of the region which had not fled before was subsequently expelled westward.

In 1949, the refugees established the non-profit Landsmannschaft Westpreußen to represent West Prussians in the Federal Republic of Germany.

I know that this has been a lot to absorb in one sitting, but it represents a signifcant step forward in our understanding of this branch of our family, which accounts for one-eighth of our genetic material and cultural background.
Posted by Dan Ruby at 6:34 PM

The three children of Stan and Helga Ruby created this blog to collect and share information about our parents and ancestry.

Comments and contributions are welcome via email to drubytue (at) gmail.com.